Saturn has been out there getting up to its old tricks again: looking really spectacular and being super interesting. This time, it’s in a series of photos taken by the Hubble Space Telescope, showing the planet’s breathtaking auroras.

Over a period of seven months in 2017, the space-based telescope used its Space Telescope Imaging Spectrograph to study Saturn’s auroras before and after the summer solstice in its northern hemisphere – the best time for viewing them.

Here on Earth, the auroras are generated by solar winds, which interact with charged particles (mainly protons and electrons) in our magnetosphere.

These charged particles then rain into the ionosphere and travel along the planet’s magnetic field lines to the poles, where interactions with other particles, such as oxygen and nitrogen, manifest as dancing lights in the sky.

Auroras are not unique to Earth, though – not by a long shot. In the Solar System, other planets have auroras too – Jupiter, Saturn, Uranus and Neptune. And there are exoplanets out there that also show evidence of auroral activity.

They’re not quite the same as our Earth auroras. Jupiter’s permanent aurora, for instance, isn’t caused by the solar wind, but some mysterious mechanism yet to be discovered.

And while Saturn’s main auroral ring seems to be solar wind-generated, there are patches of it that… aren’t. That’s also still a mystery.

And, unlike Earth’s auroras, Saturn’s (and Jupiter’s, Uranus’s and Neptune’s, for that matter) can’t be seen in visible light, since the interactions that cause them are largely hydrogen-based. 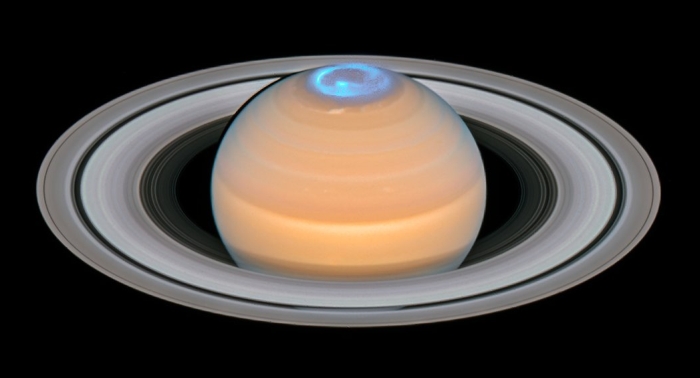 The observations were also timed to coincide with Cassini’s Grand Finale mission, in which the little probe – may it rest in peace – took closer observations of the planet’s auroral region than ever before.

“The variability of the auroras is influenced by both the solar wind and the rapid rotation of Saturn, which lasts only about 11 hours,” they wrote in an image release.

“On top of this, the northern aurora displays two distinct peaks in brightness – at dawn and just before midnight. The latter peak, unreported before, seems specific to the interaction of the solar wind with the magnetosphere at Saturn’s solstice.”

Previous Hubble observations of Saturn’s auroras revealed the presence of radio wave activity – which is also associated with Earth auroras – and a polar auroral asymmetry that indicated an uneven magnetic field.