After early humans took their first fledgling steps out of Africa and began dispersing across the landmass of Eurasia, what paths did they choose to travel, and why?

The answers might not be what we once thought. New research exploring this fundamental chapter of human migration reveals that routes we didn’t consider possible may have been walked long ago – meaning the story of how we got here could need a little rewriting.

“Our modelling of the available geographic and past climate data suggests that archaeologists and anthropologists should look for early human presence, migration, and interaction with other hominins in new parts of Asia that have been neglected as static voids,” says archaeologist Patrick Roberts from the Max Planck Institute for the Science of Human History.

In the conventional narrative, these ‘static voids’ in Northern and Central Asia include deserts and mountain ranges such as the Gobi Desert and the Altai Mountain ranges – areas thought to be too inhospitable and challenging to cross.

Because of that, researchers have historically placed more emphasis on southerly migratory routes through the Middle East and into the southern parts of China, believed to offer more forgiving environments than the deserts and mountains northwards.

“These [north] zones are thought to represent cold, high-altitude, and dry desert ‘barriers’, leading archaeologists to largely neglect them in terms of survey and their potential for being important routes of human dispersal,” Roberts and his team explain in a new study.

In more recent years though, advances in our understanding of ancient climates and weather variations – along with newer archaeological discoveries – are offering alternative clues as to how and where ancient people moved during the Late Pleistocene (from about 125,000 to 12,000 years ago). 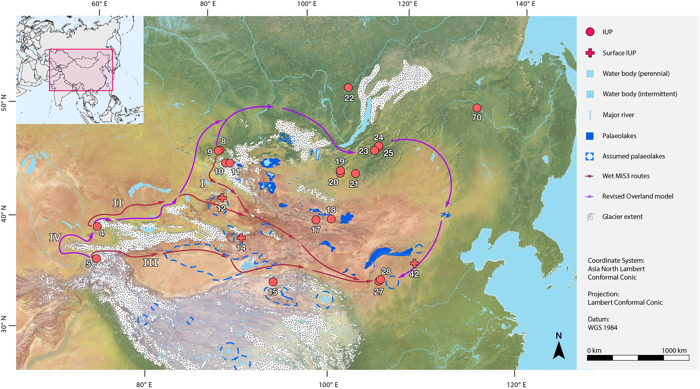 Dispersal routes across Asia based on a least cost path analysis (Li et al., PLOS One, 2019)

In this latest study, Roberts and fellow researchers used geographic information system (GIS) modelling with archaeological evidence and palaeoclimate datasets to identify potential migratory routes through Asia that had previously been ignored.

The modelling reveals a number of ‘least cost paths’ across these regions – travel routes offering the least difficulty and resistance to ancient humans on the trek.

According to the results, during dry and cold periods the Altai and Tian Shan Mountains (and routes across the Gobi Desert and the Taklamakan Desert) would have likely represented major barriers to the movements of ancient humans, as was previously thought.

But in other kinds of palaeoclimates, these regions could have actually acted as corridors, rather than barriers, thanks to prehistoric wet phases providing favourable water conditions in ancient lake and river systems, along at least three previously unidentified travel routes.

“Our least cost path models highlight that under wetter, warmer conditions direct west-east human population movements would have been possible across the Gobi and Taklamakan Deserts, and across the Altai and Tian Shan Mountain chains,” the authors write in their paper.

“It is reasonable to assume that freshwater lakes and vegetation would have drawn in mammals and hunter-gatherer populations during ameliorated conditions in the Pleistocene, including Homo sapiens in the Late Pleistocene.”

Of course, owing to the nature of the modelling, the researchers acknowledge that, for now, we can’t know for sure whether these hypothetical paths were actually chosen by ancient travellers.

But it’s possible, they say, that with more archaeological and anthropological fieldwork along those routes, we might discover an ancient body of evidence lying in wait. This could just confirm what the least-cost path analysis is telling us.

If the team is right, it might have made sense for people long ago to choose these roads, even if in previous dry times and cold climates, their own ancestors’ journeying along them would have been prevented.

Even then, the researchers say we keep learning not to bet against the human spirit in the face of ecological adversity. One of the “hallmarks of our species”, the researchers write, is its ability to inhabit (and adapt to) a diverse range of variable climatic and environmental conditions, not all of which are necessarily easy to live among.

“Given what we are increasingly discovering about the flexibility of our species, it would be of no surprise if we were to find early Homo sapiens in the middle of modern deserts or mountainous glacial sheets all across Asia,” Roberts says.

“Indeed, it may be here that the key to our species’ uniqueness lies”.

The findings are reported in PLOS One.