The window for climate action is closing before our very eyes, and as emissions continue to rise, researchers at Stanford are asking us to consider the lesser of two evils.

In a new commentary, the authors propose a wild idea that would intentionally release more carbon dioxide (CO2) into the atmosphere, while getting rid of an even worse greenhouse gas – methane.

Methane is the second most dominant greenhouse gas, and while slightly less prolific than CO2, it is 84 times more potent. Converting this agricultural and industrial byproduct into more CO2 is therefore not as crazy as it might sound at first.

Of course, swapping these two gases would require industrial methane removal as well as efficient conversion technology, neither of which currently exist.

If both these hurdles can somehow be cleared, however, the authors think their idea could remove 3.2 billion tons of methane from the atmosphere, restoring concentrations to pre-industrial levels and reducing global warming by 15 percent.

“I’m excited about this project because we have a chance to restore the atmosphere to the way it used to be and give people a reason to hope for the future,” says lead author Rob Jackson, in a recent video on the research.

The solution would not exist on its own, but would instead join a larger, more concerted effort to reduce greenhouse gas emissions in the first place. Still, once the pollution is already up there and out of our hands, removing some of the worst offenders could be extremely helpful.

Scientists are already talking about doing this with carbon, but the Stanford researchers think we need to focus more on methane. It’s more difficult to capture than carbon (mostly because of methane’s lower concentration in the atmosphere), but the team has an idea.

A crystalline material, known as zeolite, has the potential to act as a sponge, they say, soaking up methane from the atmosphere.

“The porous molecular structure, relatively large surface area and ability to host copper and iron in zeolites make them promising catalysts for capturing methane and other gases,” says co-author and chemist Ed Solomon. 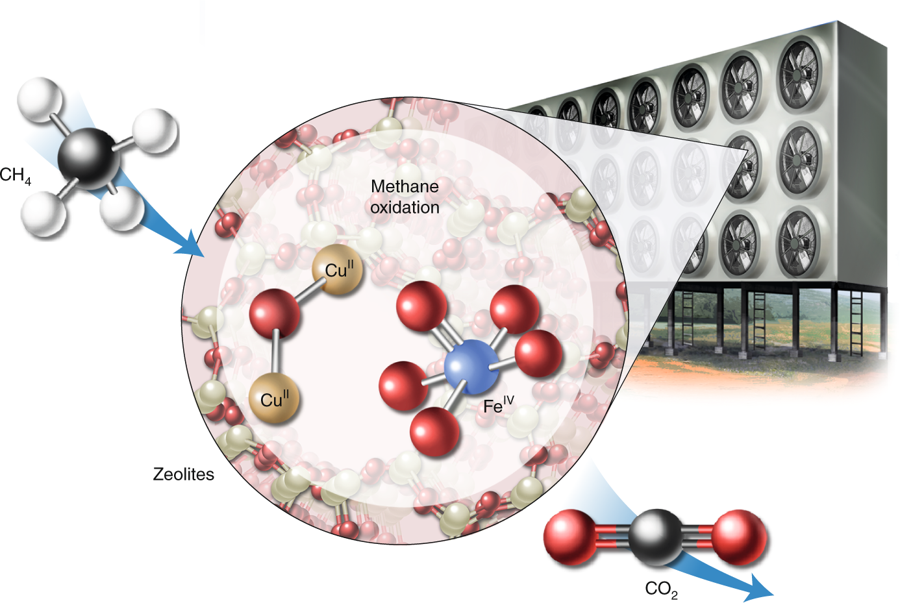 In practice, the whole contraption would look like a giant electric fan, forcing air through a series of chambers lined with zeolites or other similar catalysts. Once captured, the methane could then be heated to form and release carbon dioxide.

To get back to pre-industrial methane levels under this scenario, we would be adding over 8 billion tons of CO2 into the atmosphere, a few months-worth of today’s carbon emissions.

“It’s not trivial, but it’s not a deal breaker,” Jackson told Scientific American.

Depending on its size and efficiency, a system like this could end up costing a lot. Carbon capture itself has received plenty of criticism in the past for being an expensive climate option.

The researchers are hopeful this will not be the case with methane. If a price on CO2 can be implemented, they say it could even generate significant revenue.

“Methane conversion would likely be more expensive per tonne than negative emissions for CO2, and its potential cost and profitability remain uncertain, but it could yield greater climate and economic value because of methane’s greater potency as a greenhouse gas.”

Most scenarios for carbon removal are predicted to take decades and won’t even come close to restoring things to pre-industrial levels.

The idea of methane conversion seems extreme and has risky unknowns, but it seems that some researchers are willing to consider it.

This study has been published in Nature Sustainability.