A ledge juts out, and below, the bottom drops down to a 6-by-1-metre (20-by-3-foot) opening, from where about 120 million gallons of water rush from the planet’s interior each day. That small opening leads to caverns, still not fully mapped or explored, that go down more than 120 metres (400 feet).

Back up top, a soft-shell turtle swims past the glass wall. Maybe a mullet, or a gar. And then the mermaids.

OK. Actually, they are women with iridescent tails zippered over their legs, doing choreography underwater and demonstrating the impressive modifications the body can make when it’s required to hold its breath during exercise.

One of the newest additions to the group of swimmers is Paisley, a 19-year-old from Indialantic, Florida. Paisley is her show name. The mermaids don’t publicize their last names, to keep the magic alive and also because of stalkers.

Each day, Paisley awakes as a human. But then she slips into her suit and becomes something else. The “something else” is not just about the costume, or the persona required for a silent and skillful spectacle.

It’s also about how she stays underwater for the full 30 minutes of each show, never surfacing (and never ceasing to smile). She glides through the spring’s current. When she needs a breath, she draws oxygen from a hose connected to the ledge. 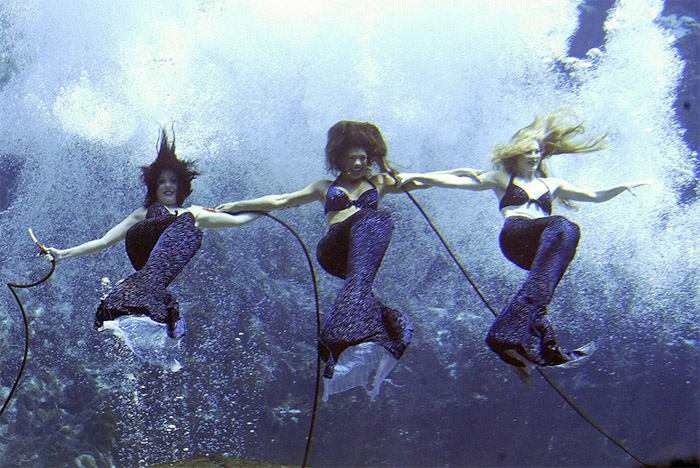 Paisley had never been a competitive swimmer or a dancer or any of the other -ers that might help someone dance underwater. But she was a Florida girl, and Florida girls are fish. So when her college classmate, already a mermaid, offered her a private audition, she took the bait.

The first test was a 400-yard swim – 200 with the current of the Weeki Wachee River, and 200 against. Then she had to dive down in front of the auditorium’s windows. Smile. Wave.

“They just try to see how comfortable you look in the water,” Paisley said. “Make sure you’re not scrunching up your face.”

Later, officials showed her real-mermaid moves and sent her back below to try them out. The management also wanted to see how long she could naturally hold her breath.

At the audition, Paisley managed to hold her breath for 30 seconds. The trainers could work with that, because they knew her body would change by the time she became a mermaid. She was in.

Having mermaids who do not surface or rely on a visible breathing apparatus has been key to Weeki Wachee’s ethos since the beginning.

The mermaids’ hose-based breathing method was developed in the 1940s after Newton Perry, who had once trained Navy frogmen, bought the site. The clear, limestone-ringed spring was dense with junked kitchen appliances and old cars.

Perry cleared them out for his weird vision: a place where mermaids swim. He started playing around with ways that people could inhale air without having unwieldy tanks against their spines. 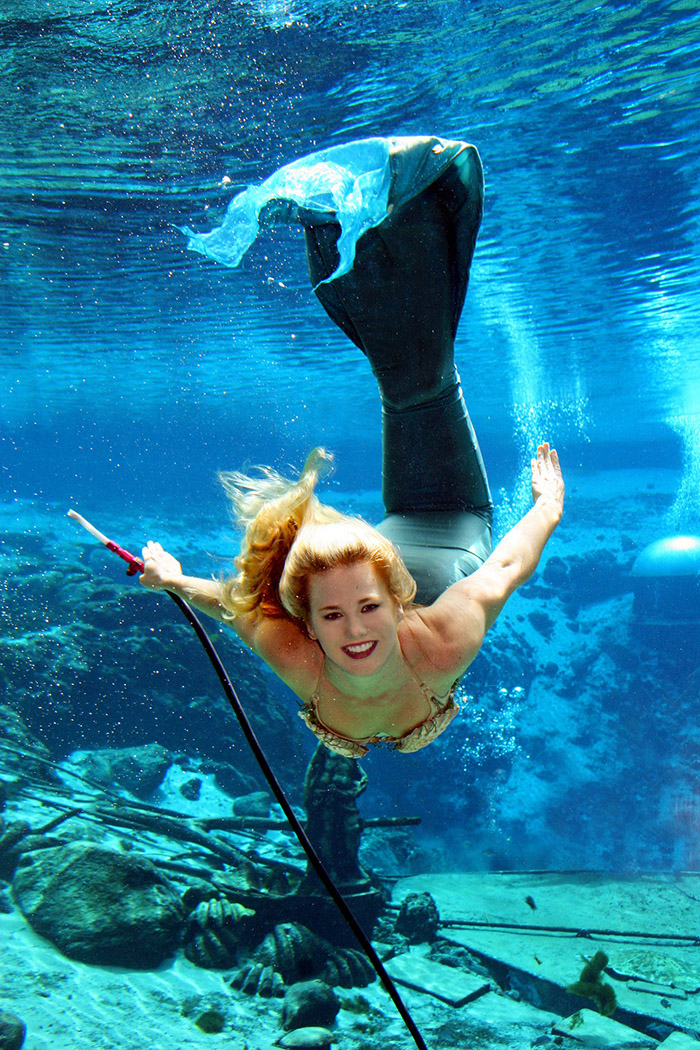 The hoses he finally installed – which constantly push out air from a compressor – function today pretty much the way they did when Perry opened the park in 1947.

In 1959, ABC bought Weeki Wachee, and up to half a million people a year – including Elvis Presley and Don Knotts – came to see the shows. The springs’ denizens lived up to their hype, becoming the “World-Famous Mermaids” that the owners proclaimed they were.

Today, Weeki Watchee Springs is a state park, and the shows are mostly tasteful water-dancing plays. Just about a year after her transformation, Paisley has performed all the parts in every show.

But initially those roles seemed distant. The first few months as a mermaid were more a process of becoming than of being. Before she could really get started, she had to get scuba-certified, CPR-certified and lifeguard-certified.

So she had to begin going airless: she’d jump into the spring – through a cylindrical hole beneath the mermaids’ dressing room – and do a piece of the choreography. Surface. Breathe. Repeat. It was exhausting to be so human.

When all her certifications were in place, it was time for Paisley to meet the hose. Trainers told her to go into the water, grab her lifeline and stay underwater for five minutes without freaking out.

“I didn’t like it at all,” said Paisley. But she didn’t freak out, either. She then focused on learning to control her circumstances.

When she took a breath from the hose, that oxygen filled her lungs like balloons, and her body floated upward. If she exhaled, she sank down. Archimedes intuited this more than 2,000 years ago, and Paisley was proving it.

Soon, Paisley began to practice doing the mermaid moves to music, with mere human legs. No one gets a tail until they reliably keep their legs together. (I know.)

“It took me about a month before I got my tail,” she said. And when she did? “That was a big highlight,” she said. “Finally feeling like a real mermaid.”

New identity acquired, Paisley was nearly ready for performances. But there are some concerns associated with keeping yourself underwater, breathing only intermittently and exerting yourself next to turtles.

First is the acceptable limit for holding your breath. Research has established a safety cutoff for people who do synchronized swimming. According to Teresa Alentejano, a world-renowned synchronized swimming coach and physiology researcher, a 1995 paper set the stopping point at 40 seconds. Thanks to the hoses, mermaids never have to hold their breath for longer than that.

Jim Chimiak, medical director of the nonprofit Divers Alert Network, said the health concerns about staying 20 feet down are minor. The water pressure where the mermaids perform is about 1.5 times the pressure that a body experiences on land, an increase that doesn’t require any decompression.

Divers do have to take care to equalize their middle ears, though, which they can usually do by simply swallowing. “The eardrum, bones of the middle ear, or hearing and balance organs of the inner ear can be injured or permanently damaged otherwise,” he said.

Really, though, the concern is more surface stuff. Their bodies might not restore the natural oils that the water carries away. Cracked or cut skin could lead to infection from bugs in the water.

The women also have to hydrate well, as each entry into the water will, in Chimiak’s words, “stimulate a diuresis” – that is, make them pee more than usual. And then, of course, there’s swimmer’s ear, which can plague even the casual watergoer, and hypothermia from the springs’ 22°C (72°F) constancy.

But while the bodily concerns are banal, the physiological changes to these breath-holders are more remarkable.

Synchronized swimmers’ heart rates decrease quickly when they begin to hold their breath, even though they’re exerting themselves. This is the body’s way of tricking itself into wanting to breathe less.

“When the heart rate is lower, it implies that there is less oxygen being needed,” said Alentejano, “and consequently less is being provided.”

The mermaids’ ease in the water also helps. A normal person’s “can’t breathe must breathe” feeling initiates a fear response, which makes the heart beat faster. And a spiral of despair requires more brain oxygen to fuel panicky thoughts.

Alentejano even speculates that because the untrained body can curtail or cease nonessential functions to hoard oxygen for the heart and brain, the synchronized swimmer’s body may have expanded on that – including muscles required for swimming as essential, and thus saving oxygen for them.

Paisley probably hasn’t overanalyzed herself in this way. She mostly thinks this is a great first job. (The starting salary is US$10 per hour.) She likes her betailed sisters. And she likes the way children react to her – as they would to seeing Santa Claus.

Every day or so, Weeki Wachee Springs State Park uploads a new “Tail Mail” video, in which a mermaid answers a letter from a young fan. On 18 January, Paisley read a letter from Paige, age 6. “Could you turn me into a mermaid, please?” Paige asked.

“I would love for you to be a mermaid,” Paisley told Paige in a video reply. “So maybe one day when you’re old enough, you can come here, and I’ll give you a magic potion.”

She should have said: “Yes. Start holding your breath.”